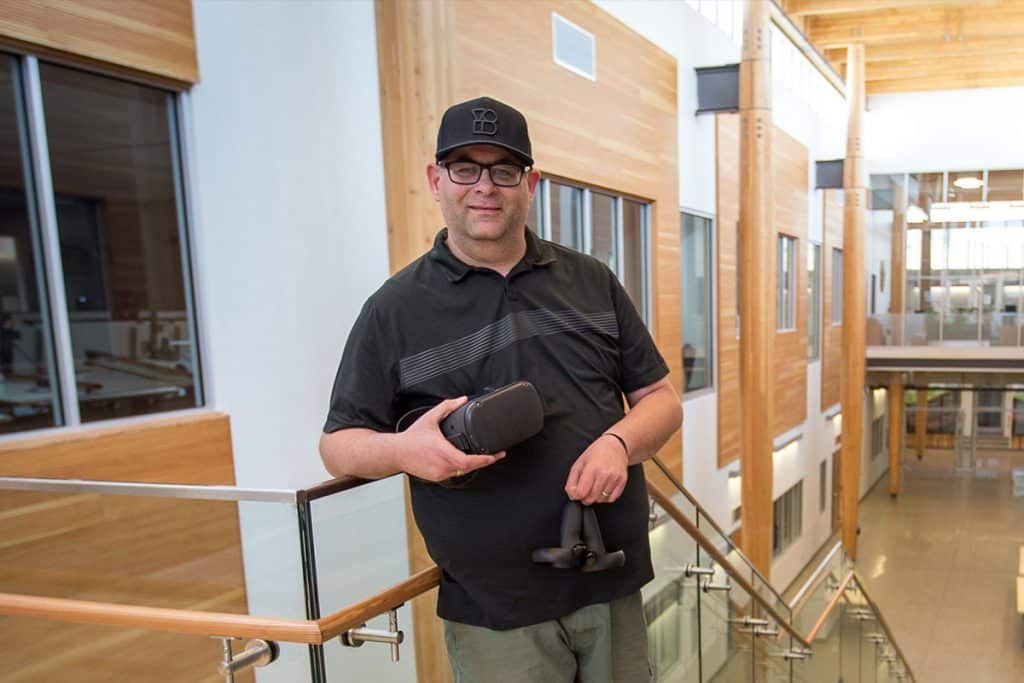 Hi Mike, thanks for agreeing to be interviewed. Can you tell us about yourself?

Sure. I’ve always had an interest in technology. When I was 14, I was involved with Bulletin Board Systems (BBS) and actually ran my own for a while. Fast forward a number of years and I graduated from the Multimedia Production program at Lethbridge College. My education provided me an amazing career in web design and development. I worked for a number of years in government and K-12 systems, when in 2008, my career took me back to Lethbridge College (for the first time). I led the college’s web team through a significant redesign project. During that time I established a number of social media channels the college currently uses. My role changed and I became the first social media strategist at a college in Alberta. Shortly after this, I left Lethbridge College (but I would be back). After a short stint in Edmonton, I came back to Lethbridge College, this time in the faculty side. In 2015, I became an instructor in the Multimedia Production program. I primarily teach 3D modeling, animation and motion graphics. During this time, I had another opportunity to be on the cutting edge. One of the courses is called Interactive Project. It’s a project course where students learn to plan and implement an interactive project.  I knew the Virtual Reality was a technology that was here to stay and that Multimedia Production students needed to become familiar. So in 2016, I started teaching basic mobile VR game design using Unreal Engine 4 and the Samsung Gear VR. This was just the beginning of the catalyst for amazing things to come. The next big thing happened in 2018 when I helped plan and organize, along with students, the world’s first full-day conference about virtual reality, held in virtual reality. Merging Realities helped put Lethbridge College on the map with VR and was the catalyst for the creation of the Virtual and Augmented Reality Certificate program at Lethbridge College.

You’ve been very busy in the virtual/augmented reality space.

Recently, Lethbridge College launched the Virtual and Augmented Reality Certificate program. As the instructor, you’ll get to shape VR/AR development in Alberta.

Does the course touch on game development?

People can learn more about the Virtual and Augmented Reality Certificate program at Lethbridge College by visiting www.lethbridgecollege.ca/vr or they can reach out to me on Twitter.

There are over 50 VR/AR Association chapters around the world. The Alberta chapter is about igniting the industry, through global reach and supporting local needs.

People can join the VR/AR Association by visiting https://www.thevrara.com/membership-details

Are there any future plans for Merging Realities and VR book club?

Yes for both. Merging Realities will continue for a 3rd year and will happen in the Spring of 2020. Stay tuned for details. The next VR Book Club will happen in September.  We’ll be reading Convergence by Charlie Fink. Follow the hashtag #VRBookClub for details.

Do you have any advice for game developers getting into VR/AR?

Yes. First off, don’t underestimate your current skills, but don’t be afraid to learn more. Connect with other VR/AR developers, join groups such as the VR/AR Association and attend meetups. Just like with indie game development, find a project you’re passionate about and get behind it. See the project to completion.

If you haven’t done so yet, learn either Unreal Engine or Unity (I’m partial to Unity). These are the two main game engines used to create VR/AR experiences. In addition, either learn C++ (Unreal Engine) or C# (Unity).

Finally, immerse yourself (pun intended) in all things VR/AR. Get yourself a VR headset, play a bunch of different types of VR experiences and become knowledgeable in VR/AR terminology such as 3DoF vs. 6DoF, FOV, screen door effect and more.

Finally, what are your thoughts on the future of VR and AR?

I wish I had the gift of foresight. I wish I knew 6 years ago that VR would have exploded the way it has. Without this gift, I’ll attempt to share where I think the future of VR/AR will go.

First off, AR will not kill off VR and vice versa. Some believe AR will replace VR. Truth is; they both serve different purposes. Currently, both technologies have points of friction that inhibit adoption rates. For VR, it’s the need for expensive computers and headsets (although some of that is being addressed by the Oculus Quest). For AR, it is experiencing augmented reality through a smartphone or an expensive headset like a Magic Leap or Hololens.

The future of VR/AR will ultimately see a device that is so ubiquitous that you don’t truly notice it – just like putting on sunglasses. Both VR and AR will be able to be experienced on the same device. We’re already seeing hints of that with devices like the Oculus Quest which has a passthrough camera. Currently, this camera is only used for safety purposes, but this will evolve to include AR capcabilities with a VR device.

While this converging of technologies may be a ways a way, in the short term, I suspect we’ll see more organizations adopting VR/AR. The reason is people respond better to spatial computing than any other medium. In the words of Tom Furness, “Being there transforms everything. It’s like writing on the brain with indelible ink.” Whether it’s education, training, entertainment, retail, marketing or a variety of other industries, people will remember more with immersive experiences. This fact will see a rise in enterprise and business use of VR/AR, which result in a rise in demand for skilled VR/AR developers. Now’s the time to get involved in the VR/AR space.

Thanks for taking the time to be our August 2019 Community Spotlight member.

Mike is an instructor at Lethbridge College.